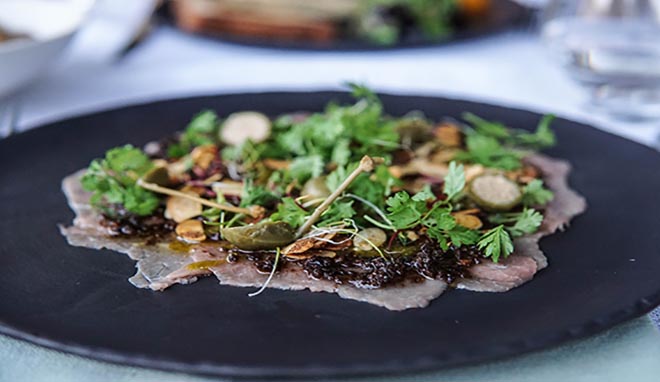 Creativity in design, service and food is usually praised and celebrated. It’s true that a certain level of quirkiness and originality can really impress customers and differentiate your restaurant. Competition is everywhere it seems. Perhaps you feel under more pressure to think of unique ways to keep your customers interested? Today we’re going to explore whether there comes a time when ‘originality’ can backfire. Are certain things a step too far in the eyes of the public? Well, according to some surprising data, guests are unimpressed when the boat is pushed out too far.

One of the most popular ways to add some originality seems to be in the way food is served. A plate is no longer the only thing customers can expect to eat their meal off. An interesting survey was carried out by YouGov Omnibus, in which just over 2000 people from across the UK took part in. Participants were shown a collection of different ways food has been served. The results showed that 99% believed it acceptable to eat from a round plate. 64% thought it was okay to eat from a wooden board. 17% thought the food served on a shovel was a quirky and acceptable way to dine. Only 10% said a dog bowl was okay and 9% were content with food served out of a shoe. Perhaps the bigger question should be, who are the 1% that think to eat off a standard round plate is unacceptable!

Twitter account @WeWantPlates has racked up an impressive 140,000 followers showcasing some of the wildest and most ‘out there’ ways that food has been served up in the UK. British diners love to tweet their most alarming experiences with the way food has been served. We Want Plates simply collects all of these crazy showcases into one place. Some of their tweets are truly astounding! Food off a flip-flop and bread served from a slipper! 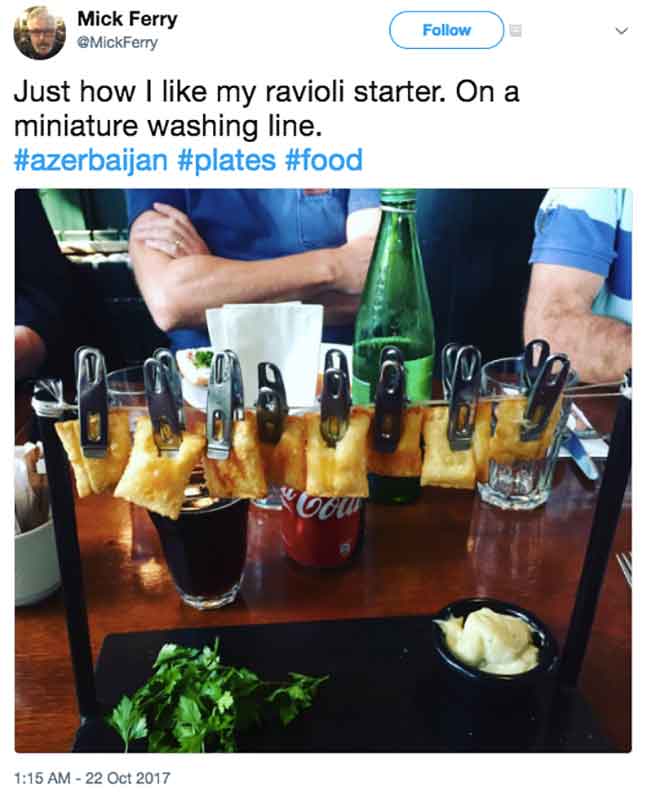 If you want an idea of what might be a step too far in the eyes of the public, here are some recent shared from @WeWantPlates: 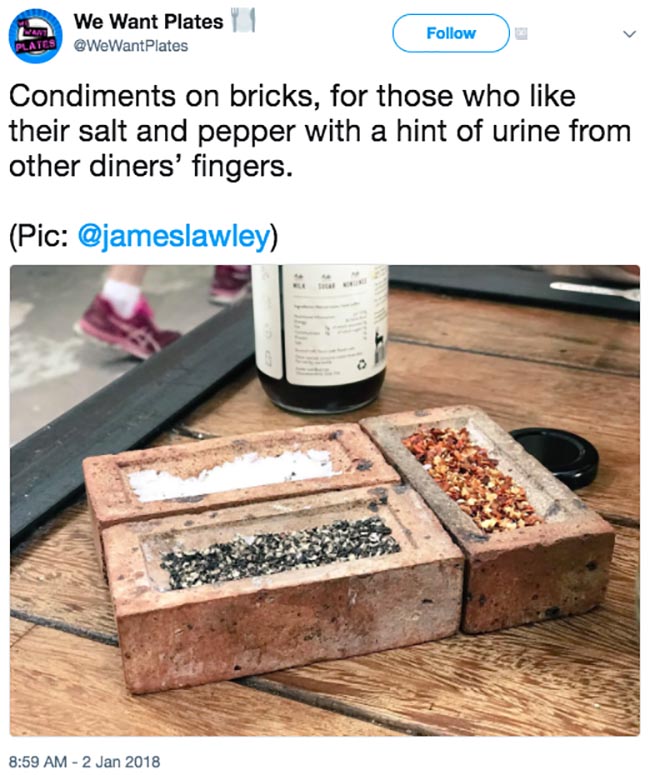 Not everyone thinks wooden boards are a nice touch. In the YouGov survey, 34% thought to eat from a wooden board was unacceptable, largely due to hygiene reasons. 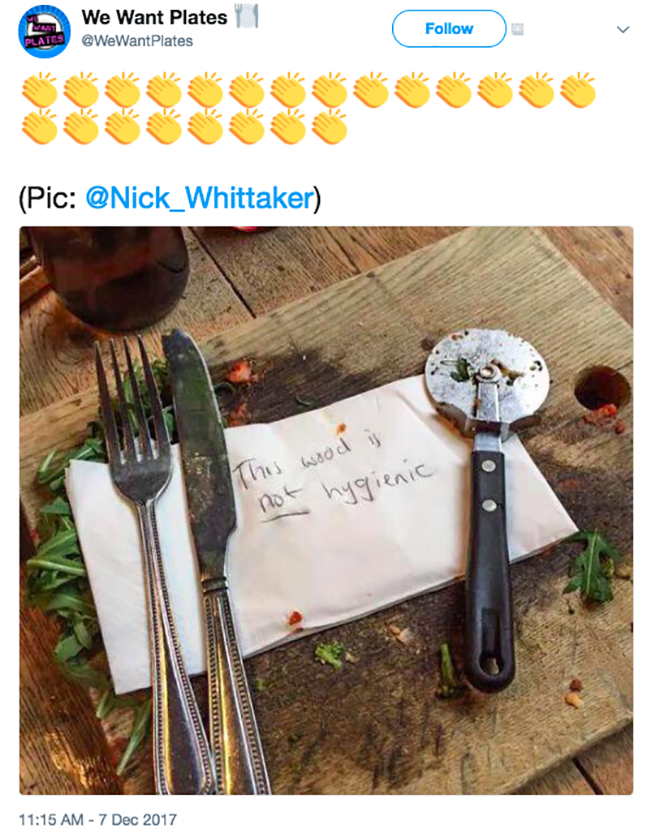 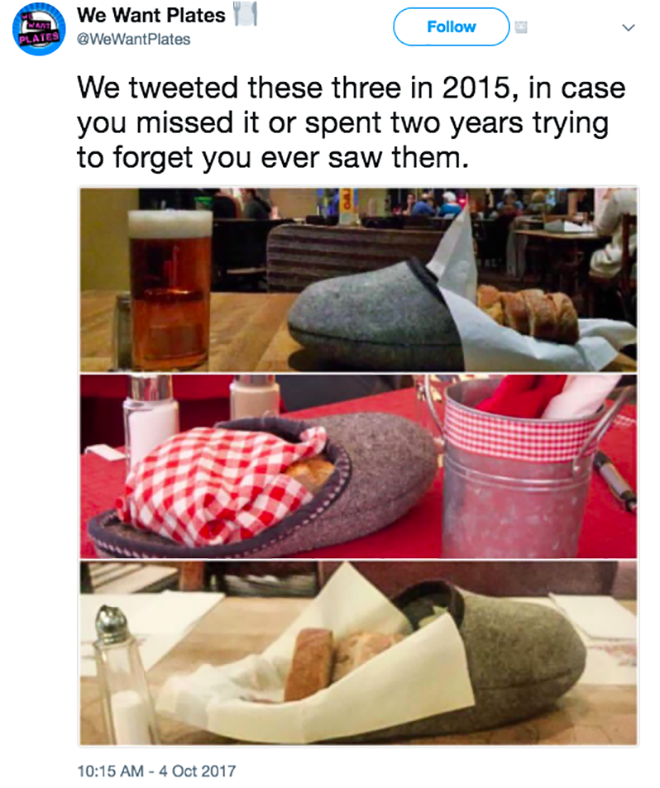 Getting creative in the way you serve food and the way you present restaurant can still be classy. It’s all about finding that balance but not taking things too far away from the ordinary. We’re certainly not saying don’t experiment, so we recommend you collect as much customer feedback as you can when new changes are introduced.

So, the verdict is in and British diners prefer to eat off plates. Plain and simple plates. Serving in a dog bowl might be just as clean and hygienic as any other plate, but it clearly has negative connotations. 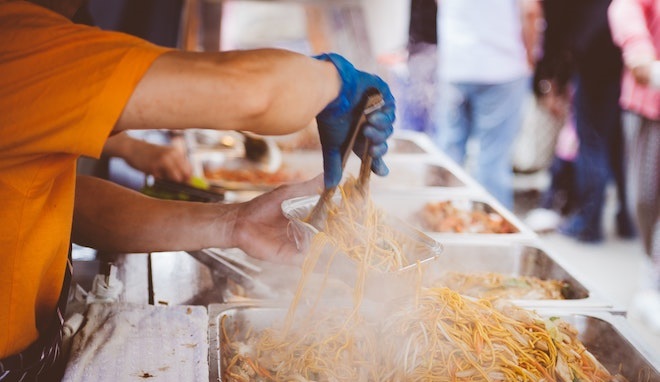